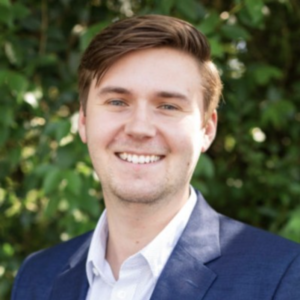 Swedish origin Adam Dahlström grew up in Houston but recently moved to Austin, where he is
taking a seat in the SACC Austin board. “My goal is to help create an environment where Swedes
and Americans can meet and establish both professional and social connections.”

Could you tell us a bit about you and your background?
I moved with my family from Stockholm to Houston in 2008. As is the case for a lot of expats, our 2-year plan turned into 4, then 8, and now almost 15 years later I still live here as a dual citizen. For my part, I considered moving back to Sweden for university but decided to stay and pursue a golf scholarship in Oklahoma. After 4 years there and a realization that professional golf was a dream that would not come true, I was at another crossroads of staying in America or moving back to Sweden. At that point I was introduced to a financial planning group headquartered in Austin that I instantly fell in love with. Since then, I have built a career around helping people meet their financial goals and objectives, and focused my efforts on helping international clients successfully navigate the complex world of investments and insurances here in the U.S.

What are you looking forward doing as a board member at SACC Austin?
My goal is to help create an environment where Swedes and Americans can meet and establish both professional and social connections. I personally look forward to continuing to build relationships with other Swedes in Austin and Texas as a whole, while helping SACC be an organization that they can benefit from professionally.

You recently moved to Austin from Houston. What would you say are the biggest differences between the cities?
Whereas I would explain Houston as a massive city, in both size and global impact, I would explain Austin as a small, big city. With more than a million people, and the fact that by most statistics it is the fastest growing major city in the United States, the city still feels much smaller than Houston. I think that SACC has, and will continue to have, a great impact in Austin as it is an attractive place for entrepreneurs to establish their U.S. operations. Personally, one of my favorite differentiators is the natural beauty here in Austin with lakes, rivers, and hills.