“Julotta” is a traditional Swedish church service held early in the morning on Christmas Day. “Jul” is the Swedish word for Christmas, and “otta” is the time just before dawn.

The tradition goes back to the Middle Ages, and everyone that could, attended the Julotta. In the Swedish Church Law dated 1686, it is stated that the Julotta should start at 6 AM. Further back, the tradition was to start at 4 AM. Today, most Swedish churches start the service at 7 AM. 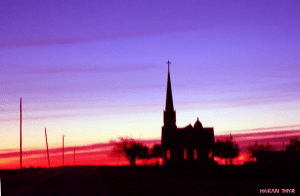 Mid-December is the darkest part of the year in Sweden, and in the “old days” people came to church early in the morning carrying torches. The burning torches were thrown in a big pile in front of the church entrance, were people could warm up before entering the church. Even if it was important to be in time for the service, it was even more important not to arrive too early for the Julotta. It was believed that the dead was performing a mass in the church at Christmas night, and if you entered the church too early, the dead would rip you to pieces. After the service, people raced back to their houses with their horse-drawn sledges. The winner was thought to become the first to harvest his crop next year,

Even if church attendance in steady decline in Sweden, the Julotta is still well attended in Swedish churches. The tradition is kept alive, and many people that usually to not go to church, show up for Julotta.

Also in Texas the old Swedish Julotta tradition is kept alive. In New Sweden, 10 miles east of Austin. Service is held every Christmas Day morning at 7 AM at the Evangelical Lutheran Church, which was founded by Swedish immigrants February 23, 1876.