Gunnar Peters started River Trinity Club de Futbol (RTCF) in Irving in 2012, wanting to create a soccer club similar to those in Sweden. “In Texas, in my experience, you have soccer clubs where the teams within the same club don’t support each other. They lack that cohesiveness.” Gunnar wanted to start a soccer club that would not only be about the sport but about the city, the city’s history, the culture and the people.

Another big focus was financial; “It is extremely costly to pay soccer here in the U.S., it’s only for the wealthy so you only reach a certain percent of potential players [those who can pay].” RTCF is sponsored by companies and the local government which keeps its fees down.

Whereas other clubs are largely dependent on weather for their training, RTCF has an agreement with the local community, and the team is able to use their recreational centers’ gyms and classrooms. In the classrooms the players learn about the FIFA laws of the game, different techniques, and are shown videos of their games as a learning tool. RTCF has a close collaboration with Superstar Sports Media who videotape their games; “Superstar Sports Media are extremely important to us, we work great together and according to the same philosophy “.

Gunnar is UEFA trained as a soccer coach and has received training in both Sweden and Spain. He is critical of the focus on winning often seen in soccer clubs in Texas. One key aspect for Gunnar is a focus on the individual, following the RTCF motto of “developing champions one player at a time”. Gunnar believes that anyone can become a good player; “it’s all about attitude and time”. 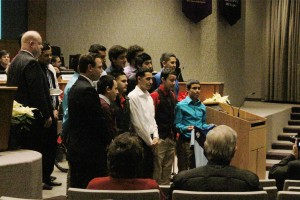 RTCF accepting the Community Service Award from the city of Irving.

RTCF is invested not only in their players’ athletic performances, but also in their academic ones; “We work with the schools and our players are not allowed to get grades lower than B’s. They need to wish for a better future.” Many of the players come from families where no one has attended college, and it is Gunnar’s hope that his players will go on to study at college in the future.

RTCF’s commitment to their community goes beyond the players, and the club was recently awarded with The Community Service Award by the city of Irving for, among other things, their work with Veterans and the homeless. 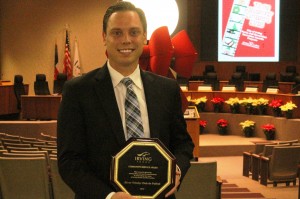 River Trinity Club de Futbol currently trains in Irving but hopes to expand into Plano. At the moment, the club has one team of players born 1998, but they plan to increase in size. Please feel free to contact Gunnar to find out more.

You can read more about River Trinity Club de Futbol on their website (www.rivertrinitycf.com) or on Facebook (www.facebook.com/RiverTrinityCF).